This document is designed to inform a user how the Ncam AR Suite Lite can be used to drive the camera viewpoint and frustum of Epic’s nDisplay framework.

As of 08/06/2022 Epic haven't updated their in-camera VFX project or documentation from UE4.27 to UE5 however the principals remain the same.

The user guide has been written for Unreal version 5.X+ and requires at least version 2.0.0+ of the Ncam AR Suite Lite plug-in or newer. It builds upon Epic’s InCameraVFX project which is included with the Unreal Engine to show how Ncam can be integrated into a scene that has already been configured for use with nDisplay. For this reason and before progressing further please be sure to first read the nDisplay quick-start guide to become familiar with the InCameraVFX template project. Epic also provides a comprehensive guide to setting up an in-camera VFX project which is worth studying for a more complete picture on how to bring all of the different elements together.

The nDisplay quick start guide can be found here.

The InCameraVFX project is included as part of UE5.

The In-Camera VFX Quick Start guide can be found here.

The hardware set-up when using Ncam and nDisplay together is not too dissimilar to the standard configuration described in Epic’s nDisplay Quick Start guide. The only addition is that each node in the nDisplay cluster must be placed on the same network as the Ncaxcvm Reality Server that is providing the camera tracking information.

It is also recommended that the Ncam Datastream SDK is configured with Ncam Reality to sync with the video signal. This ensures that each new packet of tracking data is broadcast on the video's frame boundary which makes the latency between each packet less variable and easier for Unreal to synchronize with. 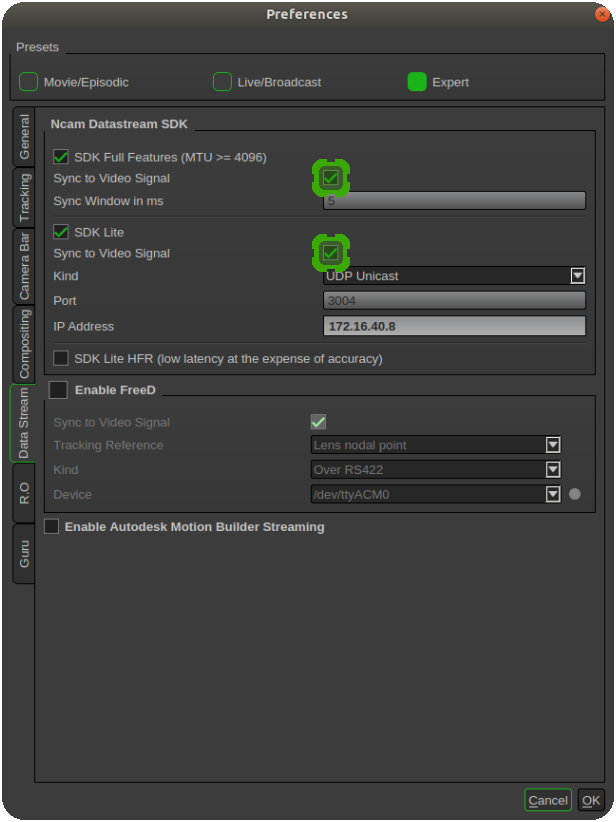 The image below illustrates how a cluster of nDisplay nodes should be connected together. Note that each node in the cluster has a network connection to both the master PC and the Ncam server.

Hardware configuration of an nDisplay stage with Ncam camera tracking

If only a single LED panel is being driven by nDisplay it is possible to simplify the hardware configuration and remove the need for an external genlock signal generator. This is made possible by genlocking (synchronizing) the single cluster (node) PC to the SDI video signal through the use of a custom time step in UE5. Please note that a small amount of sofware synchronization is still required (see Software Synchronization below) and although unlikely, this appraoch may still suffer from synchronization issues especially at higher framerates. This could cause “tearing” artefacts to appear across the LED wall when viewing it through the camera.

Please see the Software Synchronization chapter later in this guide for more details on how to use software synchronization.

Before continuing it is assumed that you have read the nDisplay quick-start guide and have familiarized yourself with steps 1-4. You should know how to create a basic nDisplay project using the NDC_Basic configuration and launch it using Switchboard. The following steps in this guide will build upon it to add Ncam to your nDisplay project.

As outlined in Step 1 of the nDisplay quick-start guide, create a new project from the nDisplay Template Project. 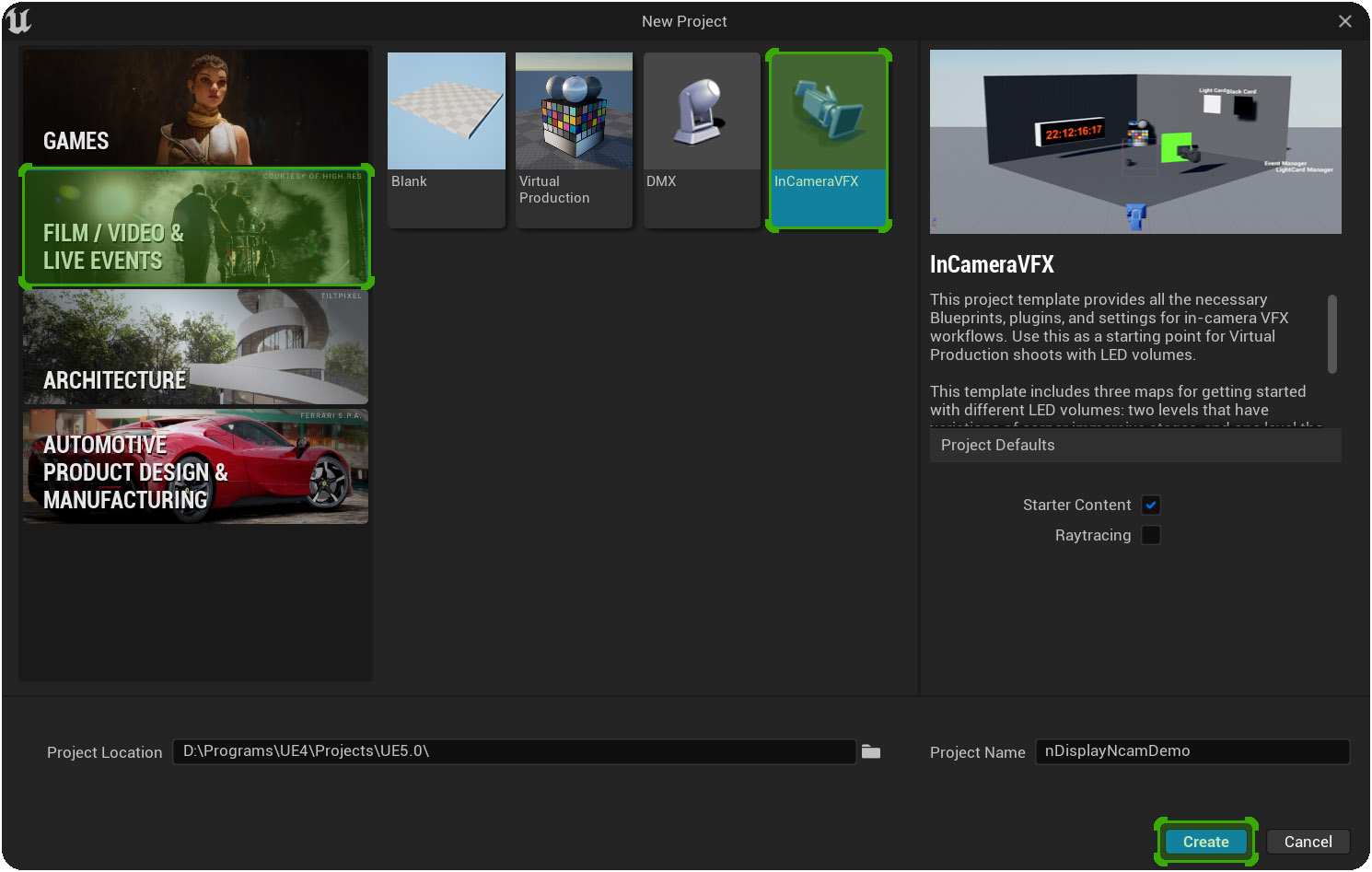 Once the project has been created, begin by first loading the Ncam AR Suite Lite plug-in before restarting the Unreal editor.

The template project is pre-configured with an nDisplay configuration called nDisplay_InCameraVFX_Config that demonstrates the use of a curved stage with four LED panels. It has three main components that can be customized to change the images that are displayed on the LED wall as well as it's geometry: 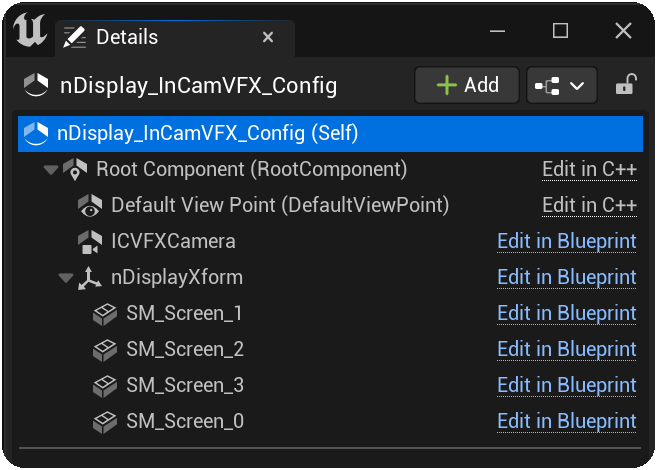 The components of the nDisplay config

Together these components allow the LED stage to both consistently light the subject and to also correctly display the viewpoint required by the camera. More information on this can be found within Epic’s in-camera VFX documentation.

Connecting LiveLink to a Camera

The ICFXCamera component of the nDisplay config references a CineCamera which is parented underneath it. This camera and subsequently the inner frustum is driven by a LiveLinkComponentController that receives its data from a LiveLink source. This section illustrates how to create a new Ncam LiveLink source and connect it to the camera.

A LiveLink Source is required to connect to the Ncam Reality Server. It can receive data from either the Ncam SDK or the Ncam SDK Lite. This data is then interpreted and made available to entities (mostly LiveLinkComponentControllers) within Unreal as different LiveLink Subjects. 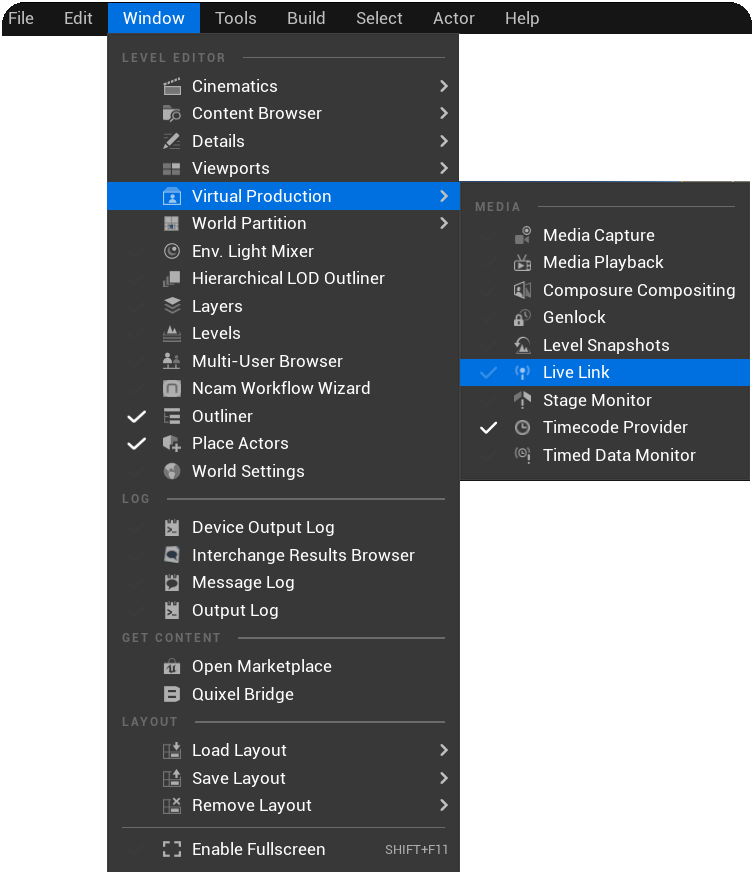 Add a and correctly configure a new NcamLiveLinkSource

Now that Live Link is configured a preset needs to be saved so that each node on the nDisplay cluster can load it on start-up. 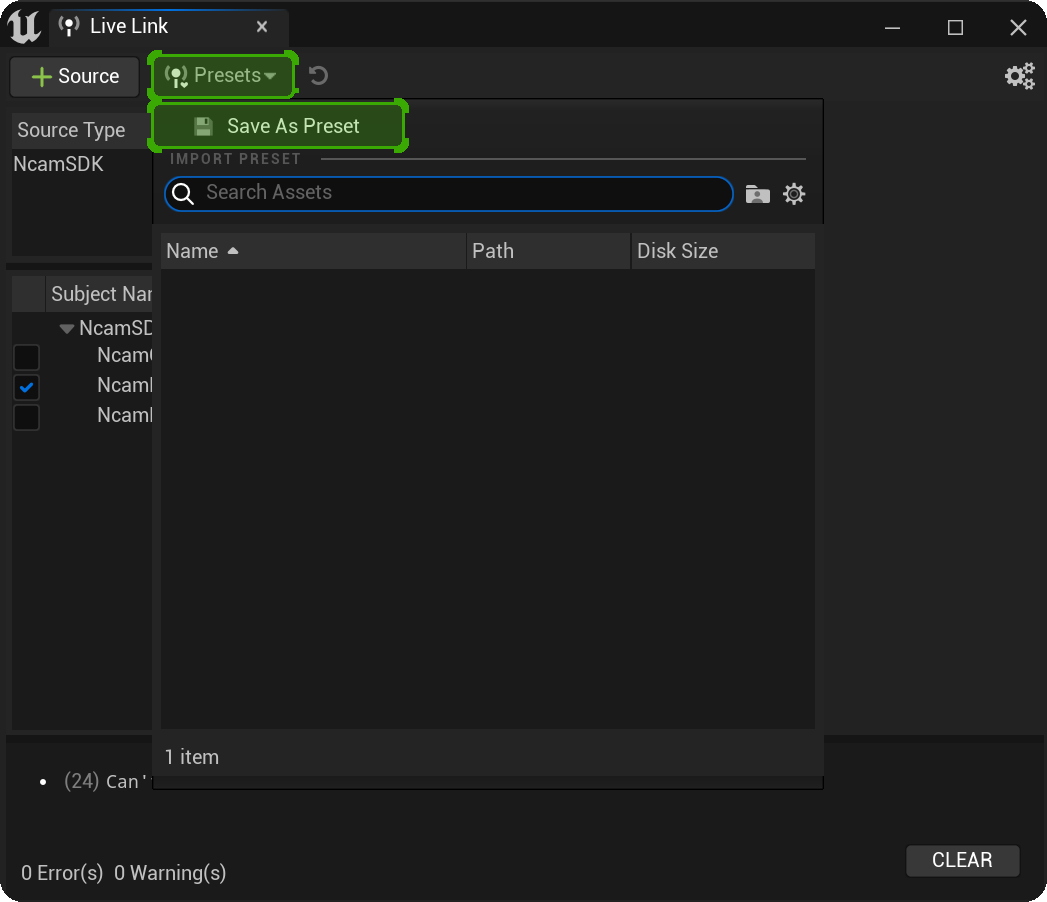 Create a new LiveLink Preset for the NcamSDK Source 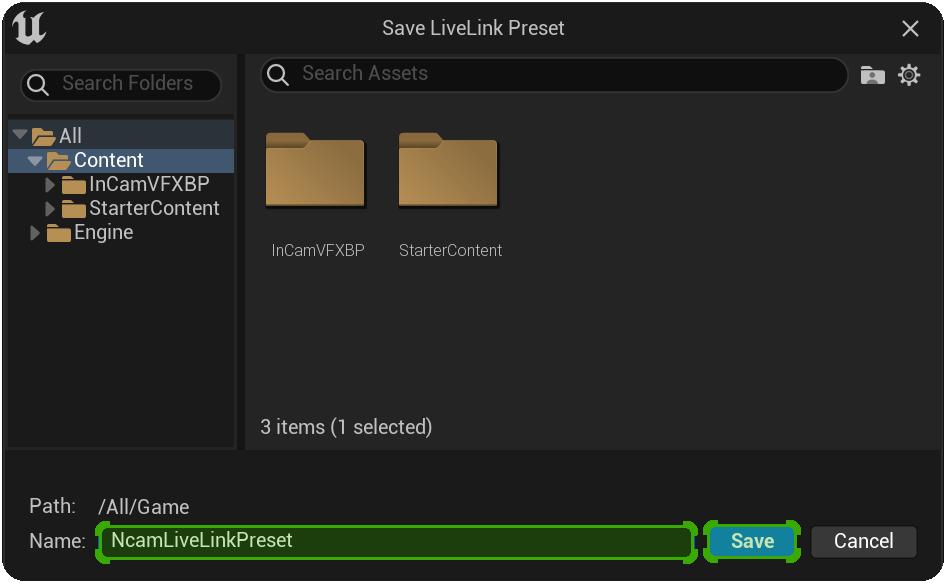 Choose an appropriate name for the new LiveLink Preset 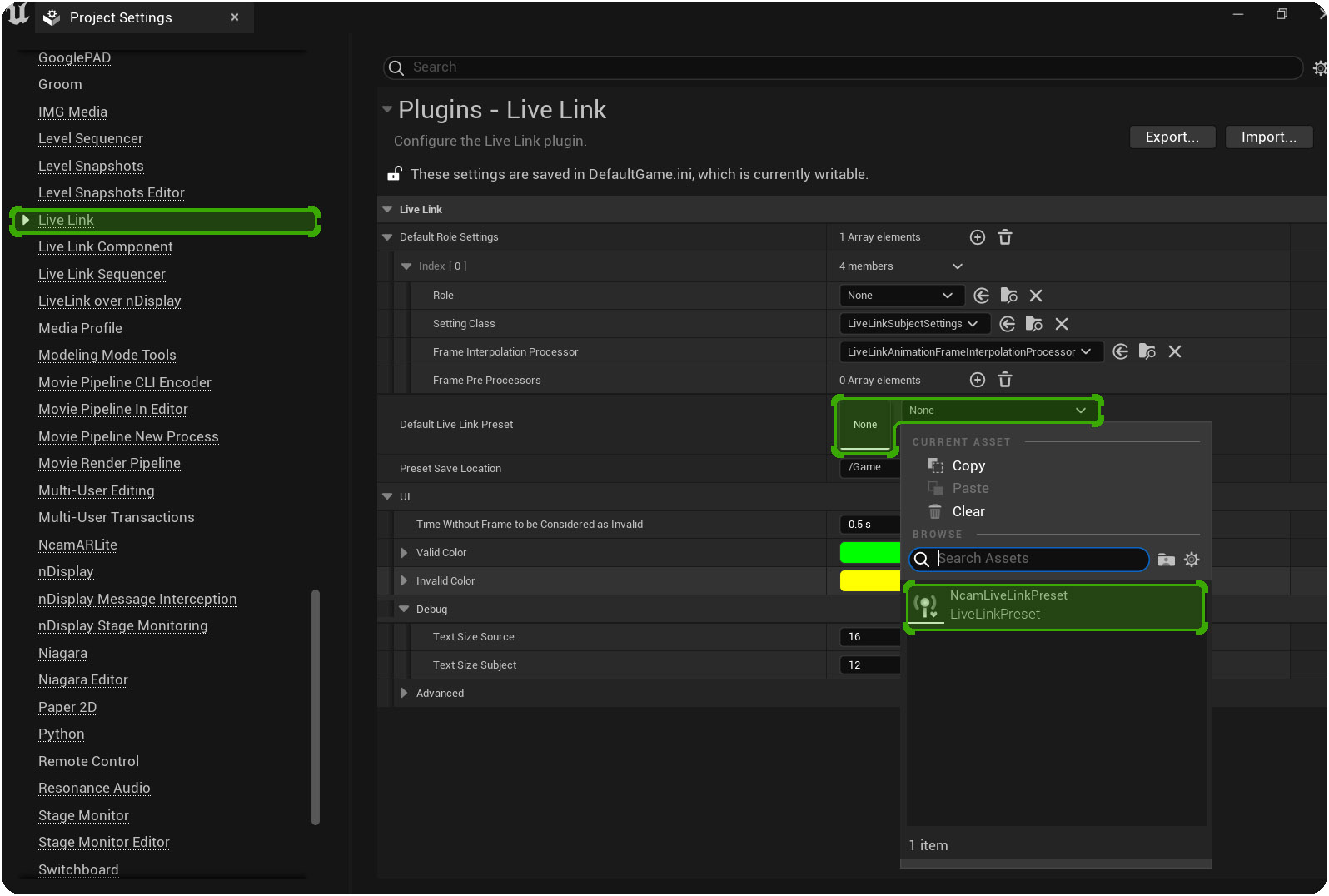 Connect a camera to LiveLink

A LiveLinkComponentController needs to be added to any object in order to control it using the data provided by a LiveLink Subject. In this case we to drive the position and frustum of the camera that is connected to the Inner Frustum of the nDisplay config.

Conveniently within the InCameraVFX project a camera called CineCameraActor1 has already been created for this purpose and a LiveLinkComponentController has even been added to it already as seen in the image below. 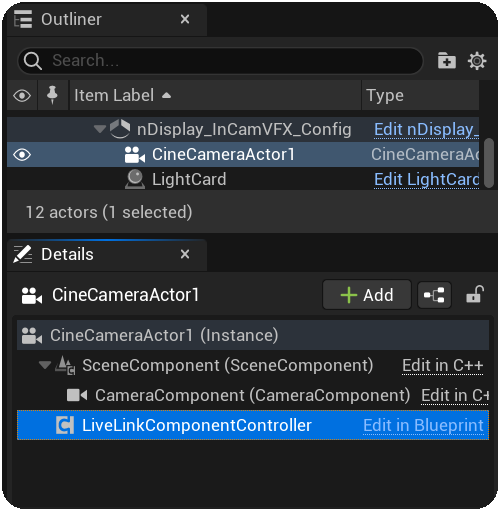 If the camera being used hasn't got a LiveLinkComponentController attached then add one by: 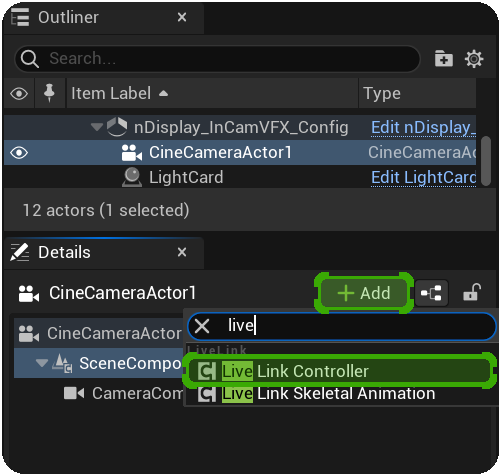 Finally, the newly created (or pre-existing) LiveLinkComponentController needs to be configured by connecting it to the "NcamLens" LiveLink Subject. 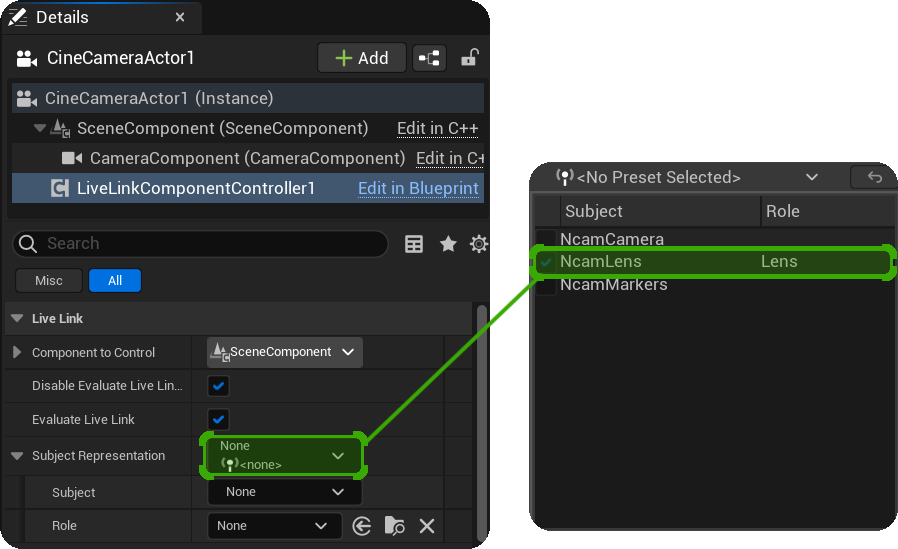 Once this is done the Camera should be driven by the LiveLink data and the nDisplay correctly set-up.

Synchronization is a very important consideration and critical to ensure that the images rendered by each node are displayed on the LED walls within the frame boundaries of the camera. Without any synchronization a number of visual artifacts could be encountered. These range from apparent stuttering in the camera motion, an offset between two LED walls or tearing of the image when viewed through the camera. To prevent these issues each node in the cluster must be instructed to render and display it’s viewpoint on the LED wall before the camera captures a new frame. The preferred way to do this is to use a hardware genlock as described in the nDisplay user guide. However, other alternatives are also possible for simple installations that only have a single (or few) LED walls. This method uses a Custom Time Step to instruct Unreal to render only at specific intervals and the instructions in this section illustrate how to do this.

The preferred method of syncronizing the nDisplay nodes together if an external genlock is unavailable is to use the SDI video from the camera instead. This would require each nDisplay node to have it's own supported (AJA/BMD) SDI video card which is connected to the output of the camera. By using either a Blackmagic SDI Input or an AJA SDI Input custom time step the Unreal engine will only render a new viewpoint for the LED wall once per frame. As Ncam Reality should also have it's SDK datastream synced with the video it is guaranteed that only a single packet of data will be sent per frame. To ensure that the Ncam SDK packets are always processed once per frame the Timed Data Monitor can be used to offset their timing.

The easiest way to manage the use of a Custom Time Step (genlock) is with a Media Profile. If the Ncam Workflow Wizard was used to set-up LiveLink then one has already been created and the next step can be skipped. 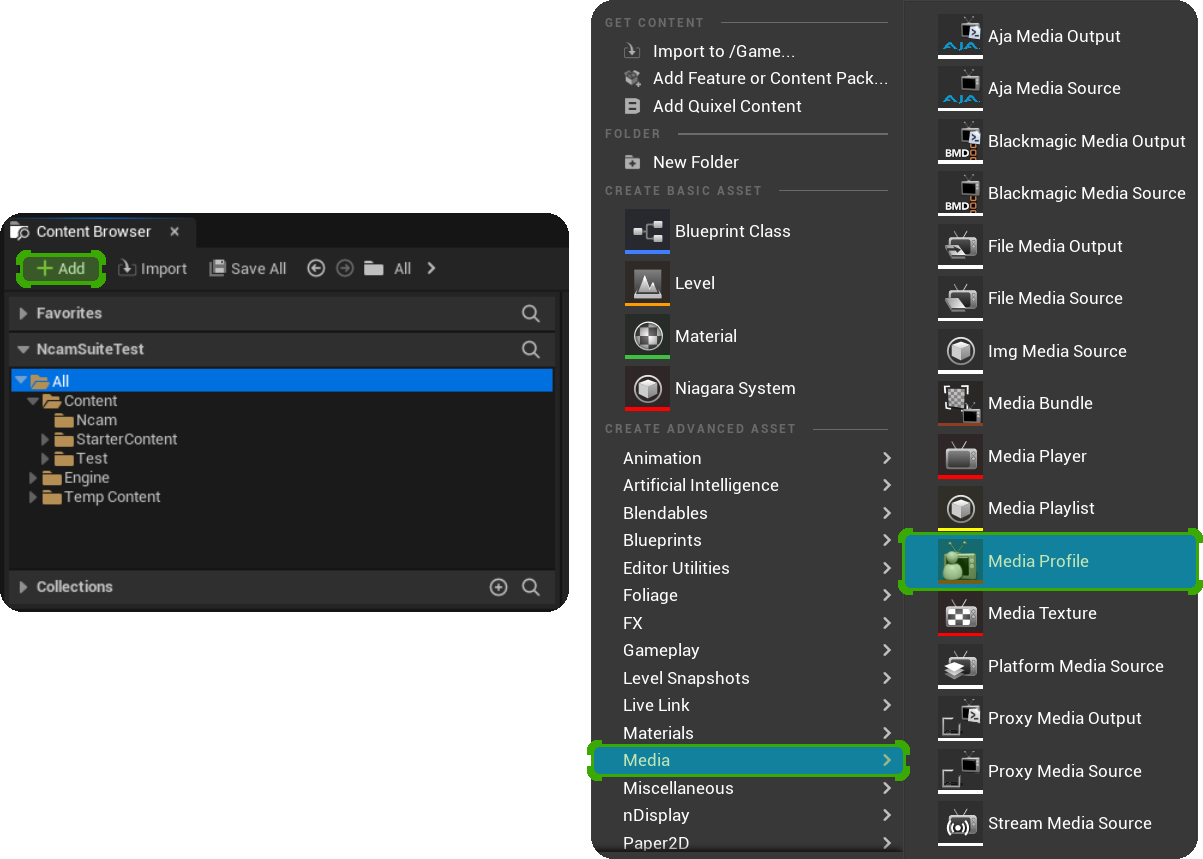 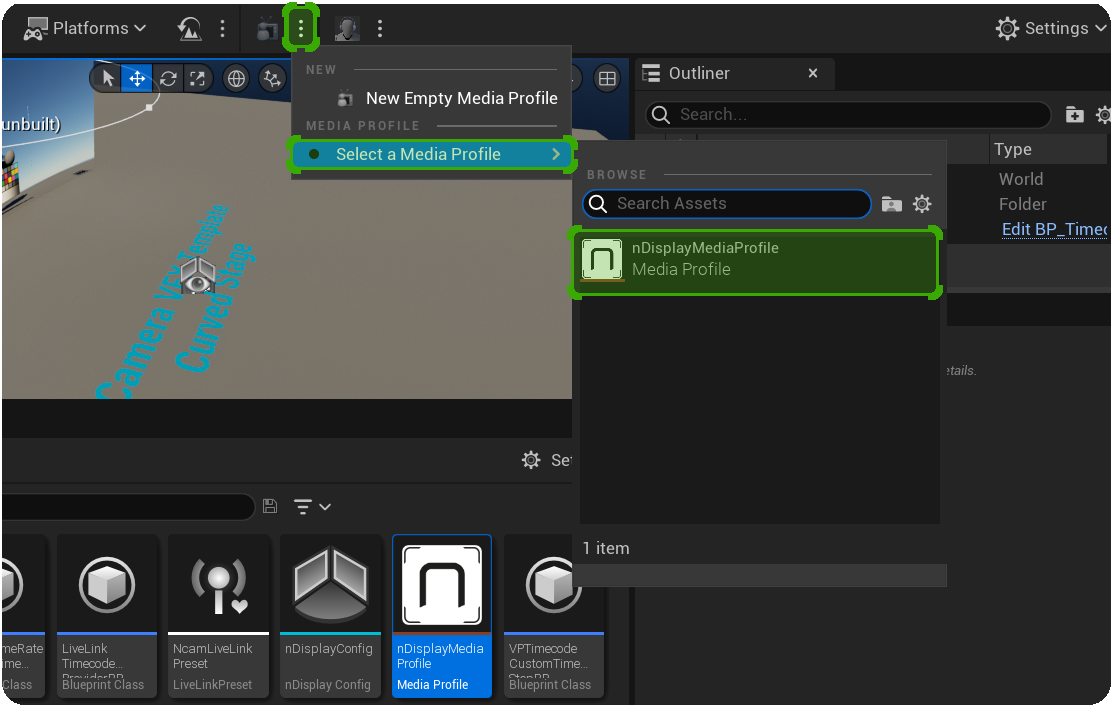 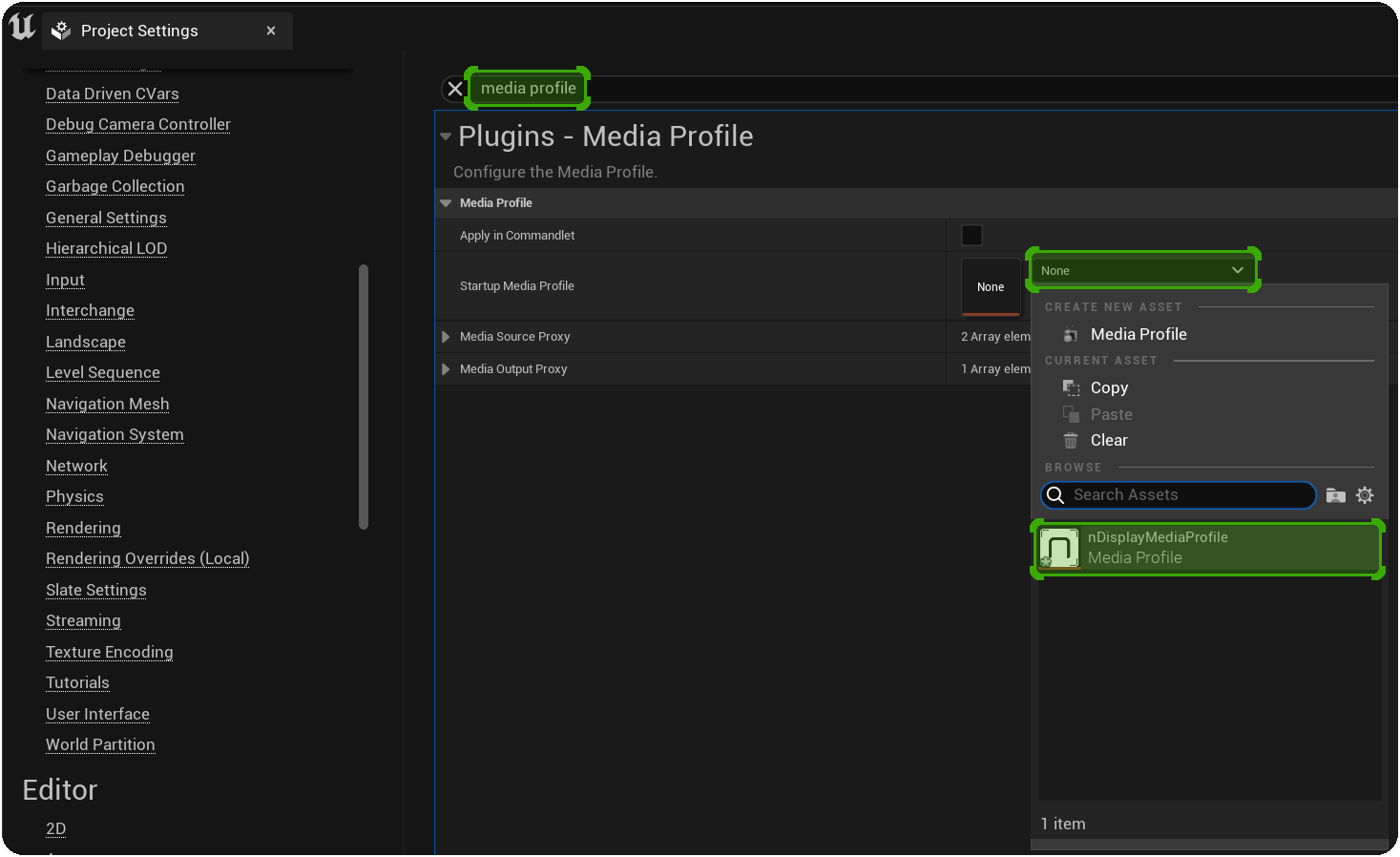 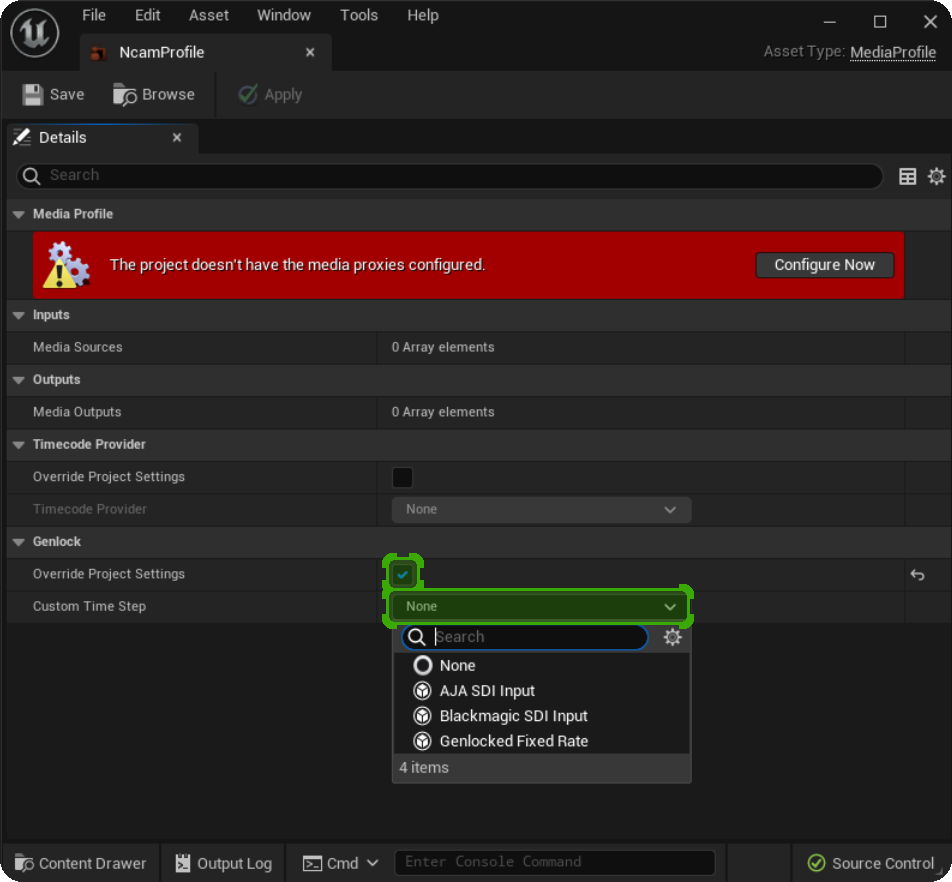 Select the device to gelock Unreal to 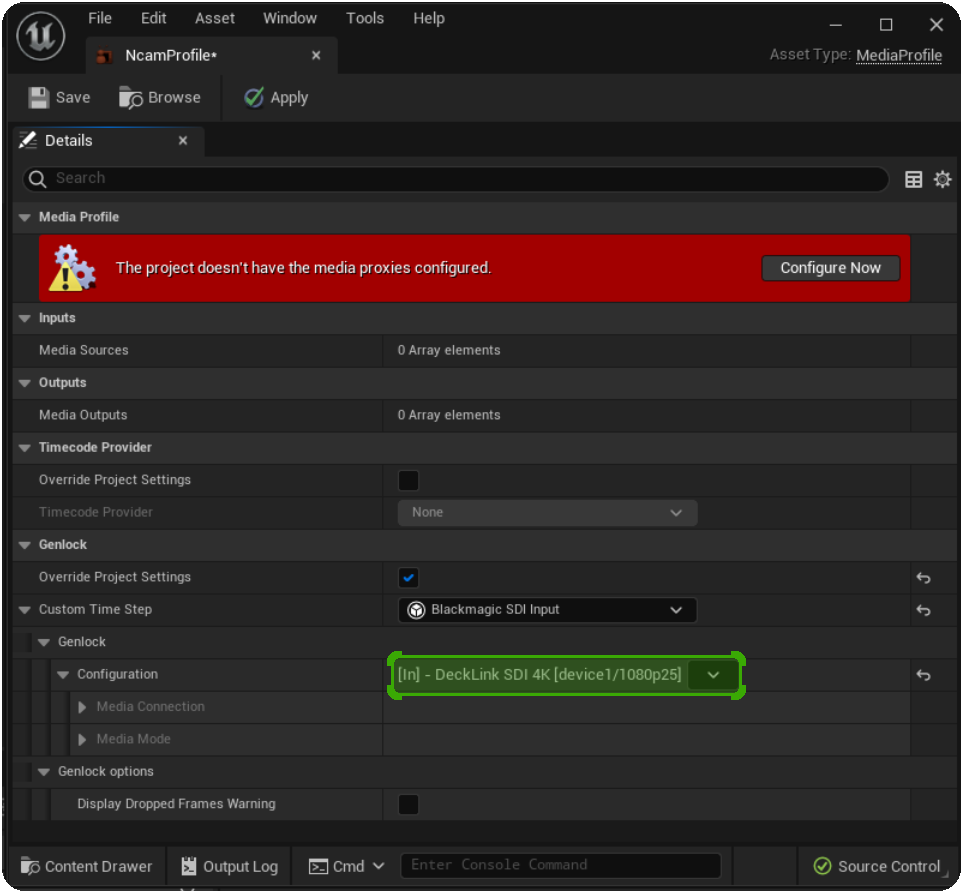 Both the Unreal engine and the data from Ncam Reality should now be synced with the video's framerate. This is desirable but due to latency in the network or software it can't be guaranteed that Unreal won't always start rendering after the Ncam data has been recieved. If left unresolved this can result in sync issues that could cause stuttering in the camera motion or tearing in the image across multiple LED panels. To make this less likely to happen the Ncam SDK data can be delayed slightly to ensure that it is always processed consistently once per frame.

This is achieved using the Unreal Engine's Timed Data Monitor which is described more fully in the chapter on Step 4 - Source Synchronization .

The image below shows how the data stream from the NcamLens subject has been offset by just over a frame to ensure the lowest latency and liklihood of a sync issue. Note that the time correction value is in seconds. 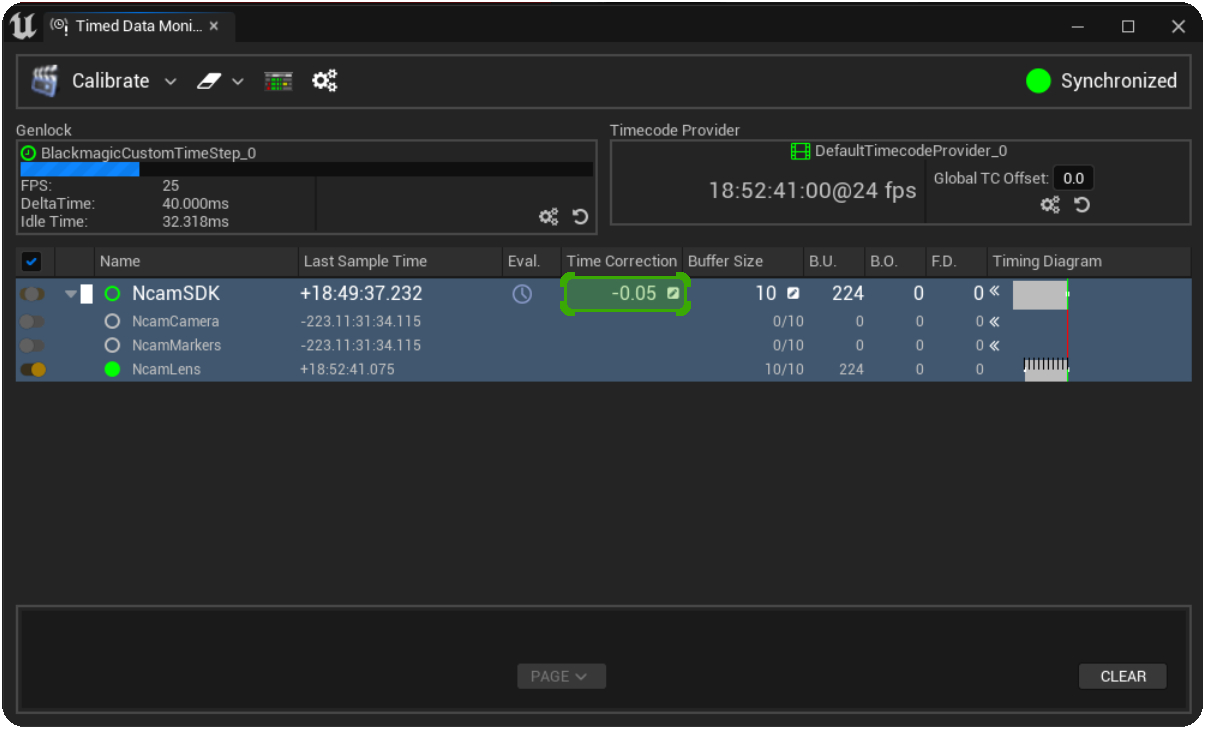 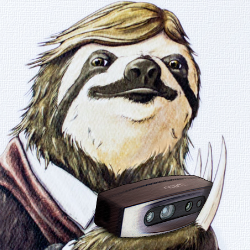 Updated 16 Jun 2022
Did this page help you?
Yes
No
UP NEXT
VR Workflow
Docs powered by archbee