Renderer is not receiving data

Assuming that the connection between the Ncam server and the renderer is a network connection, attempt the following: 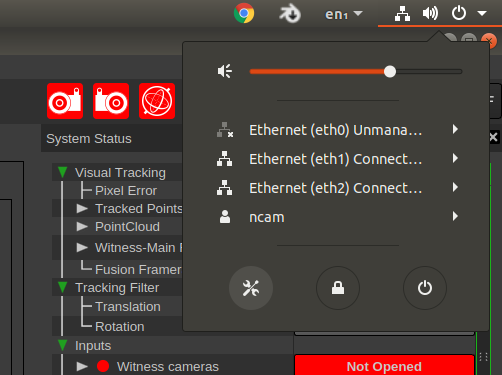 Use the HDMI dummy dongle that is provided with the Mk2 system, without this the graphics driver will not initialize on boot of the system

This is typically caused when the witness camera bar has not been connected properly.

"Unable to connect to Lens encoder"

This error message is displayed when a network connection can not be established to the connection box, try the following steps:

When working through a VNC client or remote connection, some lag is to be expected.

Confirm that the connection between the server and connection box is gigabit, this can be done using the "ethtool" command in a terminal. Enter the following:

This will display connection info for the eth0 interface, the "Speed" value should be "1000"

If "10" or "100" is displayed, try disconnecting and reconnecting the network connection between the two devices. If the connection is still not gigabit, powercycle both devices

Unless the connection box has had a hardware failure then this is nearly always related to a network configuration issue, try the following steps:

If the LED does not turn green, check the following:

If you are unsure of the connection box hostname, the appendices has a section on how to find this again 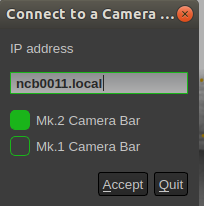 If no lights are displayed on the connection box at all check that the power is properly applied to the device, if possible try an alternative source of power. Be aware that it will take approximately 30 seconds for the LED to light after power is applied, this is normal

Liveupdate does not give good results

This is typically the case when the lens calibration has not been done very accurately. If the liveupdate solution places the witness camera in the right orientation, but ahead of or behind the main camera by an exaggerated amount then this is a result of the H and V focal values in the lens calibration being wrong.

From the perspective of the Ncam system, this can be caused by the following circumstances:

Reflective Makers not being detected

Make sure that the "Circular Features" tracking option is enabled in the "Preferences > Tracking" window.

Reflective markers should not be deformed in how they are applied to a surface. That is to say, do not stick them to curved surfaces such as pipes or tubes as this will impede how well they can be detected

Additionally make sure the IR emitter is attached to the camera bar and is powered. The LED light will emit a red glow to indicate it is powered.

Finally ensure that the size of the markers are large enough to be detected at the distance that the camera bar is observing them at. The marker calculator can be used to help determine the correct marker size for your setup

Updated 01 Jun 2022
Did this page help you?
Yes
No
UP NEXT
Appendices
Docs powered by archbee

Updated 01 Jun 2022
Did this page help you?
Yes
No
UP NEXT
Appendices
Docs powered by archbee